Sam Sethi and Twitblogs: What is Fact, What is Fiction? 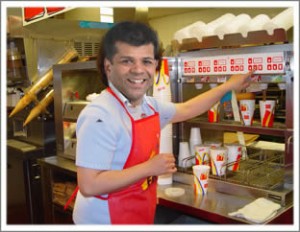 Want Fries with That?

Anyone that has followed the technology scene the past couple of years has probably read about the doings of Sam Sethi.  His reputation as well of the swath of destruction he’s carved through the online mediasphere has been nearly unparalleled.

Beginning with his noisome divorce from Techcrunch UK, subsequently his remarks where he actually threatened a former business associate with grevious bodily injury, followed by his incredible Blognation charade where he basically stole between four and six months of full time blogging efforts by more than a dozen top bloggers (none of whom have ever received so much as a heartfelt apology from Sam, let alone payment as promised in multiple forums).

Recently when speaking with another blogger at an event Sam was asked what the deal was in regards to what happened with Blognation.  It just so happened that a friend of mine was in the vicinity and heard the question and Sam’s response.  He looked the other gentleman in the eye and said:  “It’s simple, really.  I lied.”  Incredible.  The man has no conscience, shows no remorse, cares not what he did to the people who made some big sacrifices on his behalf.  There’s a word for people like this: sociopath.

You’d think that after a debacle like what he did at Blognation he’d have the decency to stay out of tech for a while – like permanently – but some folks have no shame and instead of staying well away from the community that by all rights should treat him like the pariah he truly is, he heard an idea he liked, Twitwall, tried to glom onto it by weaseling his way into someone else’s company, got denied when his track record came to light, and subsequently started a rip-off company, Twitblogs.

This slimy behavior was brought to the fore thanks to Techcrunch but Sam has no shame and he keeps on keeping on.

One of the things that Techcrunch pointed out in its post on the topic is that Twitblogs had no formal privacy policy.  As they pointed out – would you trust your data, let alone your credentials to a guy with Sethi’s track record?  Me neither.

*We do not store your password, we authenticate using Twitter’s API only.*We will not disclose your personal details (e.g. email address) to any 3rd party business without your consent, unless we are required to do so pursuant to lawful requests, such as subpoenas or court orders, or in compliance with applicable laws.

We will endeavor to write a more comprehensive and complete policy moving forward. Please note that we take the security of your privacy and details very seriously.

Yeah…right…they care about privacy and security so much that they can’t be bothered to borrow some boilerplate that’s been vetted by a company like Yahoo, put their name in there and adhere to that policy at least until Sam gets around to trying to play lawyer and draw up something of his own.

As funny as that is, though, I’ve saved the best for last.  Here’s Sam’s current description of his role  at Twitblogs:

Sam’s role is to manage the product/features road map and manage our growing list of partners. Twitblogs already has a number of high-level relationships agreements with companies such as Amazon and Sun Microsystems.

It would be interesting to call Sun or Amazon and see if they really have such “high-level” agreements.  Sam said the same thing about Sun and other companies during the blognation disaster and to a one they hadn’t heard of blognation nor Scam Sethi…

This of course begs the question:  what is fact, what is fiction.  From what I can see no one knows. not even Sam…