How Stupid is Palin? Very. (and corrupt, too) 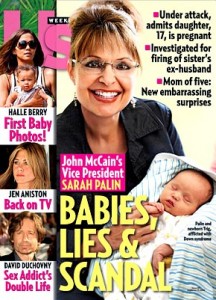 Perhaps it’s a bit unsporting to go after Sarah Palin  – the much maligned Hockey Mom from Alaska – particularly given that she and her family are know known in some circles as the Wasilla Hillbillies after the way they behaved during the McCain campaign but the news that continues to come to the fore about this person is simply too much to ignore.

The latest – aside from her drama and theatrics which included “going rogue”, refusing to speak to McCain while on the Straight Talk Express (perhaps renamed the “not talking express” or maybe the “stop touching me express” or possibly even the “i’m a third grader express” though that might be insulting to third graders that appear to know more geography then the cartographically challenged Palin who must be one of those “US Americans that needs maps and doesn’t has maps” but I digress.)

No, the latest is that this woman who clearly hasn’t realized that in the gun fight of world politics she’s armed with one of those clown guns with a flag that unfurls from the muzzle with the word “bang” on it – hardly the requisite hardware when even the most minimally armed adversary she’s going to face is packing a howitzer – this polititard apparently can’t even identify Africa on a map of the world and hasn’t quite learned that the aforementioned is a continent and not a country!

It’s somewhat terrifying to think that the person who would be charged with brokering a peace deal in the middle east can’t even find the area on a map.  It’s even more frightening to contemplate what else she simply doesn’t know.  After all it was hardly like we had unfettered access to her to randomly question her about all manner of topics that might be important to carrying out the duties of the POTUS in a competent manner.

I can only wonder what else the McCain staffers know but which they aren’t yet telling.  It has since come out that in addition to her lack of knowledge about the earth she has a profoundly broken sense of ethics.  During the campaign word leaked to the press that Palin had spent some $150,000 of campaign funds at Neiman Marcus outfitting herself from head to toe in high-fashion designer garb so that she could look exactly like that icon of fashion Tina Fey.

What we didn’t hear (at least until later) was that the sum was actually somewhere between $190,000 and $200,000 and that it included some $40,000 for her secessionist hubby (who doesn’t appear to like the country but seems to like the country’s political donor’s money just fine), and thousands more on outfits for her kids who were apparently sporting brand new Gucci shoes while disrupting business on the erstwhile Straight Talk Express which according to one staffer was at times more like the “Baby Poop Express”. (what’s next  breast feeding while attending to a visiting foreign dignitary? and no, I’m not bashing motherhood or women here – just Palin and her clearly compromised sense of what is reasonable.)

The Gucci shoes in particular when coupled with what the children where apparently dressed like prior to the spree resulted in the creative but apparently appropriate moniker “the Wasilla Hillbillies” which so funny and so on beam that when I heard it what I was drinking literally came out my nose as I snorted in laughter.

From what I understand Palin had to buy and then the campaign staff had to schlep 13 new suitcases to carry all the clothing she purchased from one place to the next during the tour.  Not only is this unfair, ludicrous and irresponsible it also begs the question – if she wasn’t planning on keeping it (as she claimed on national television where she said that after the campaign it would be donated to charity) why would she have spent so much money on suitcases to pack it all around with her?  (and you can bet that she didn’t buy those suitcases at Wal-Mart either.  It wouldn’t surprise me if they came from Louis Vuitton or maybe Tumi.

So has any reporter bothered to track where the clothes went after the bus had pulled into the garage and the sun set on McCains last big battle?

Not that I’ve heard.

What I want to know is if the Gucci shoes the kids are sporting went to a deserving inner-city youth from the projects or if they now sit mud stained and damp in some mudroom in the Governer’s mansion in Alaska?  And what about all the suits she bought her hubby not to mention the tailored pink and beige suits she wore herself?  Did she hang onto them once again breaking her word to the very people she claims to wish to serve?  If not then I’m sure that she should be able to tell us which charity they went to?  After all such publicity would be good for the charity wouldn’t it?

My bet is that those thirteen bags (whatever brand they turn out to be) was delivered to Palin’s residence within a few days (if not a few hours) of her arrival back home and that their contents are now safely ensconced in the WB’s newly expanded clothes closets.

What makes this whole clothing issue all that much worse (and far more worrisome from the perspective of her future political ambitions) is that again according to McCain staff this spree was “one step shy of stealing”.

According to the unnamed source a wealthy McCain supporter had given Palin a credit card to use for the purpose of purchasing 3 suits for the Republican National Convention.  The staffer reports that this was the extent of the permission that Palin was given and that upon seeing the receipts for the nearly $200,000 in charges the donor was shocked beyond words.

As a country that is reeling from the collective shocks that commenced with the subprime mortgage crises and which have now extended to the financial markets, the banking system, the automotive industry and soon to the credit card companies too – a country saddled with a nearly incomprehensible national debt and a budget deficit that is hard to imagine let alone manage, it hardly demonstrates the sort of restraint or fiscal responsibility that we need in a leader when the first chance she gets she basically steals from a campaign contributor and goes off on a buying extravaganza like an oil-rich third world dictator at a Russian arms bazaar.

All humor aside though, this is very troubling.  There are still some people – let’s call them “right wing nut jobs” that haven’t realized that this woman is not only stupid she is dangerously unhinged.  She is clearly corrupt without apology, has the ethics of a Bush-Rice hybrid, and the IQ of Dan Qualye with a head injury. It is obvious that rules are something that only apply to other people and that the only laws that you break and the ones where you got caught breaking them.  She appears to believe that power is to be used for personal gain and that being elected to a high station gives one certain inalienable rights to mistreat other people and to use that power expressly for personal gain (or worse, personal and/or vindictive satisfaction) as well as for enforcing her personal religous doctrine (which is a far cry from sane let alone reasonable) upon anyone and everyone – and God forbid she (or her whack job preacher decide that you’re a witch which could literally mean your life is in jeopardy.

All I can say is thank God McCain lost.  I said it before but it was worth saying again.  Now let’s just hope that people don’t forget the bullshit she pulled this time around when 2012 comes up.  Provided that we’re all still here and that neither a pole shift nor the crossing of Nibiru cause a global cataclysm that renders all elections superfluous because you can count on her trotting out that bs folksy enunciation and that false-as-hell wink because the truth is that Palin is just dumb enough to believe that she’s got the people fooled.

2 Responses to How Stupid is Palin? Very. (and corrupt, too)