[Most] Companies Don’t Get Social Media As someone that actively works in social media I’ve become progressively more convinced that the majority of companies don’t have a clue about social media or the importance it can play in the way a company presents itself.  Granted, there are some companies that do understand the potential benefits that they can derive from a properly conceived social media effort but far more not only fail to grasp just how valuable this new form or marketing and customer contact can be they also seem to be totally unaware of the pitfalls that a badly executed campaign can have. 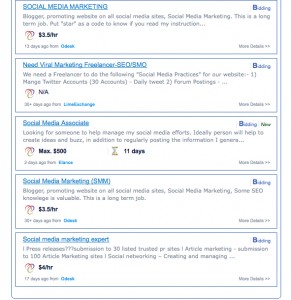 Check out the pay offered for this group of social media listings.  Just what kind of people do these companies think they’ll get for $3.50 an hour?  This is less than half of the minimum wage here in California.  Not to be disrespectful of people that work for minimum wage but does it really make sense to trust the public facing aspects of your company to a person that would be willing to work for less than they’d be able to pull in doing ANY OTHER PAYING WORK?

These are the people on the front lines of your company.  They’re the first ones that are going to be communicating with your customers, getting your corporate message out there to the world, dealing with complaints, moderating disputes and hopefully building your online community.

To put it another way, would you trust your automobile to a mechanic that charged you $3.50 per hour to repair it?  And if you did, would you honestly be surprised if things went drastically wrong shortly after you picked the vehicle up from the garage?

I don’t think this issue is due to the fact that companies don’t have the money to spend, rather I think it has a lot more to do with the fact that senior management doesn’t really have a clue what a social media campaign is, how to execute one or whom they should bring on board to do the heavy lifting.

A company that really understands social media realizes just how crucial these people on the front lines can be and it hires (and pays) accordingly.  In fact the companies that really get it generally have a senior executive charged with the execution of their social media efforts and in turn, this individual either acts as the forward facing evangelist, community manager, corporate blogger, etc. on behalf of the company or he or she hires experienced, talented, educated people that themselves already have significant social media experience to execute the strategy that the executive has conceived.
What they don’t do is offer a few bucks an hour to whomever they can find to do the work.

In the former case the company realizes the value of their efforts which reaffirms their decision to put real money and qualified personnel in community facing positions while in the latter it reaffirms their executive’s views that social media is not a viable arena in which to invest.

For those companies that fall into the latter group I have some advice: either make a real commitment to social media, invest in quality people (by paying a reasonable amount for qualified individuals that can show you how to execute a campaign) or simply abandon your efforts entirely.  This is not a playground for the fainthearted or uncommitted.  You’d be better off doing nothing then doing something half-baked and discovering too late that a bad social media strategy is much worse for your company than no strategy at all.

Oliver Starr is a well known blogger, speaker and serial entrepreneur. His current blogging is focused on mobile technology and applications, green (eco-protective) technologies, and entrepreneurs and their companies. He is currently engaged as the Community Evangelist for Pearltrees.com, a new social curation tool. Oliver was also a professional cyclist and six time member of the US National Cycling Team.
View all posts by Oliver →
This entry was posted in web2.0 and tagged blogging, blogs, employees, evangelism, facebook, marketing, Social Media, strategy, twitter. Bookmark the permalink.

One Response to [Most] Companies Don’t Get Social Media