And These People Expect Amnesty? (a Guest Post from Gary Burton) Editor’s Note:  This is from an email I just received from a friend of mine, Gary Burton.  I was pretty shocked to see the images he’d sent me.  I can’t fathom why these kids would affront the very place that is providing them with the amazing opportunities that our country has given them – the predominantly welcome embrace that people from other countries have been shown by the US and all the benefits that they gain simply by crossing the border.

How many of these kids have their education subsidized by the taxes that you and I pay?  I don’t even have children yet I know that some portion of every dollar I earn goes to pay for schools that educate some of these thankless little brats – many of whom have parents that have never paid a dime into the system that is now providing an education for their offspring.

Well, I for one am appalled at this lack of respect as demonstrated by these fools.  If they hold this country in such disdain, they really should return to their ancestral domain and make the best of it that they can.  Let them spend four or five years trying to make ends meet in Mexico and lets see how they feel about the US then.

I don’t usually promulgate propaganda but this is simply too much and any American that isn’t shocked and appalled by this image needs to spend a few months living abroad to gain a more realistic perspective.

SEND THEM ALL BACK SOUTH OF THE BORDER.

I guess they already finished their  English homework!!!

You will not see these heart-stopping photos on the front page of the NY Times, nor on the lead story of the major news networks.
The protestors at Montebello High School took the American flag off the school’s flag pole and hung it upside down while putting up the Mexican flag over it. (*See pictures below*) 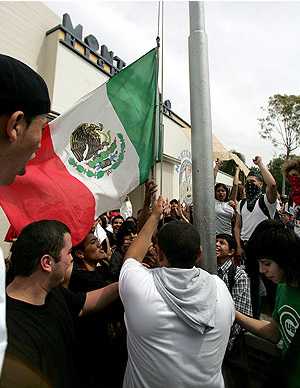 I predict this stunt will be the nail in the coffin of any guest-worker/amnesty plan on the table in Washington..
The image of the American flag subsumed to another and turned upside down on American soil is already spreading on Internet forums and via e-mail.

Pass this along to every American citizen in your address books and to every representative in the state and federal government.
If you choose to remain uninvolved, do not be amazed when you no longer have a nation to call your own nor anything you have worked for left since it will be ‘redistributed’ to the activists while you are so peacefully staying out of the ‘fray’.
Check history, it is full of nations/empires that disappeared when it s citizens no longer held their core beliefs and values. One person CAN make a difference.
One plus one plus one plus one plus one plus one…….. .

The battle for our secure borders and immigration laws that actually mean something, however, hasn’t even begun.

If this ticks YOU off…PASS IT ON!
IF IT DOESN’T IT SHOULD!

One Response to And These People Expect Amnesty? (a Guest Post from Gary Burton)