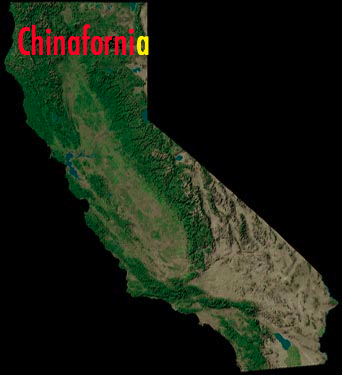 Today’s unprecedented announcements have lead to mass chaos here in the United States. At this point it is uncertain if a Federal state of emergency will be announced or not, particularly in the former state of California where no one seems to know who is in charge or which government, if any, has the right to declare a state of emergency or even martial law…

It all began merely six hours ago when, due to the continued precipitous fall of the US dollar, China, became so concerned with the apparent inability of the United States to honor the now $36 trillion in unsecured loans or even meet the annualized $1.2 trillion in interest payments, that the Chinese government called the notes due and payable immediately.

In response to this action the McCain – Palin White house made an offer so incredible – so unbelievable – so truly incomprehensible that nothing like it was ever imagined by the general public or conceived of in our constitution or under any law nor by any prior administration. Under the incredible pressure being exerted by the Chinese, coupled with the threat that the US would be expelled from the G-8, and would also be cut off from any further exports from China as well as facing the prospect that OPEC would agree to the Chinese demand to dispense with the US dollar as the sole currency under which OPEC oil could be purchased President McCain, with Vice President Palin at his side proposed the shocking one-time deal.

In exchange for their agreement to forgive all debt including any past due interest payments as well as to cease their demands upon OPEC and extend further credit for the now $3 trillion in annual Chinese imports (mostly from toys, pharmaceuticals, animal feed, and personal care products) McCain offered California to China.

Of course the Chinese accepted the deal immediately and have announced that their new territory will be renamed Chinafornia. There was one additional caveat to the Chinese acceptance of the deal. They insisted upon a one thousand year lease, including all mineral rights to the Arctic National Wildlife Preserve. Being in no position to negotiate, McCain agreed and the Chinese have apparently already contracted with Russian owned Rosneft to immediately drill exploratory wells and begin construction of a pipeline in anticipation of future oil discovery.

Many questions remain unanswered at this time which has lead to the aforementioned unease particularly among US citizens who now find themselves to be occupants of what appears to now be foreign soil. Among these questions, the most crucial appear to be whether the residents of Chinafornia have now lost their US citizenship and become in effect naturalized Chinese, or whether they will be considered illegal aliens and ultimately forced out of the country as the millions of Chinese that had been waiting for approval to immigrate to the US begin arriving as soon as the first flight lands tomorrow morning.

Of course property ownership is another huge question that has yet to receive any satisfactory answer from either the former administration or Chinafornia’s new leadership. Do homeowners retain the rights to their property and now simply pay their taxes to China? What about businesses in the territory? And who is responsible for Chinafornia’s own massive $586 billion budgetary shortfall?

Business owners are justifiably nervous – one man could be heard angrily demanding to know what sort of trading regulations will be put in place? As many companies based in Chinafornia have offices throughout the United States and even the globe one has to wonder: will those companies be split up?

At this hour little is known and even less is certain. The one thing we do know is that China is taking this deal very seriously and reports indicate that they’ve immediately dispatched one hundred and sixteen carrier groups including some 540,000 combat troops towards the Chinafornia coast, ostensibly to provide protection for the new territory. The obvious question has to be asked: protection from whom?

Certainly the US Military is over matched should combat ensue. In spite of McCain’s bold pre-election platform that due to his own distinguished military service he was the more qualified Commander in Chief in a time of war our military capabilities have continued to deteriorate due to a combination of arrogance and ineptitude. Like his immediate predecessor, the draft dodging, booze swilling “Bonesman” (who after leaving office finally acknowledged that the pre-election reports that had my own personal hero, Dan Rather cast from the pantheon of reporting greats were in fact completely accurate) McCain has made glaring strategic errors at every turn.

His “maverick” reputation has certainly been firmly established. Sadly the reasons for this – principally for failing to heed the advice of his generals who have actually seen the combat zone from beyond the comparative safety of the “Green Zone”. But also for ignoring the pleas of his own Secretary of Defense and other Cabinet members, as well as an impassioned Op-Ed piece in the New York Times written by none other than Colin Powell. Of course Powell has no credibility either. The disgraced former commander never recovered from the lies he told America on behalf of Bush, Cheney, Rumsfeld and the rest of the Neo Cons.

While it is easy to blame McCain and Palin for the current situation, we have to remember that the descent began at the hands of the aforementioned group of political thugs that have dragged us so far from Kennedy’s vision of this country that he wouldn’t recognize it today if he were resurrected.

Palin in her now widely known as false ‘bonhomie” jargon was quick to point out that there is in fact a silver lining to the Chinafornia debacle. “It puts” she said, “a huge dent in the immigration problem. With the number of illegal aliens residing in what used to be a US State” she continued, clearly reluctant to pronounce the name of the ex-state, California, “as well as the huge amount of unprotected border that this “wilderness” area comprises, it takes an enormous burden off our border patrol and will ultimately save us tens of millions of dollars as a result of no longer having to defend this extensive region.”

McCain too, attempting to salvage the remainder of this disaster they call a term, tried to put a positive spin on things. “With their unparalleled ability to get the most from their citizens and their ability to manufacture virtually anything we can at 100th the price, the advantage of having a new Chinese territory so close to the US will have a dramatic impact on the shipping costs as well as the lead times for Chinese imports” he said.

In spite of these impassioned messages of hope, the American people – who – it must be said have mostly themselves to blame for this situation – having not once but thrice allowed elections to be corrupted by a republican machine that somehow managed to generate more votes for McCain than there were registered voters in both parties – combined! are not having any of it. And by the look of things in the District of Columbia where McCain and Palin made their historic announcement, things could turn ugly fast.

…This Just In…
It appears that while this broadcast was being taped, preliminary news has come in from an unidentified source at the WhiteHouse and according to this source the district of Columbia may have been sold off to the highest bidder in a silent auction that apparently just concluded moments ago.

The initial reports suggest that Saudi Arabia has penned the winning bid however a second source claims that Iran, flush with cash from recent oil sales to China, India and Russia has actually made an offer that was as excessive as it was unexpected.

Our man on the ground in Iran reports that Ahmadinejad has already been on Iranian television announcing his winning offer.

This reporter has personally had and seen enough for one day. He can only hope that this telecast has been the worst nightmare he has ever had and that tomorrow when he awakes he will find that California is still part of the Union and not the newest addition to the Republic; in spite of how much he can save on lead painted toys, contaminated pet feed and pharmaceuticals, regardless of how this would solve the immigration problem and in spite of the mountain of debt that can now be stacked not only to the moon but nearly to Mars.

In fact it can be said that there’s a certain delicious irony in the fact that GHWB and his lame duck son had both spoke of one day putting a man on Mars though one has to suspect that neither one had a dead two dimensional US President in mind when they made that suggestion.

Oliver Starr is a well known blogger, speaker and serial entrepreneur. His current blogging is focused on mobile technology and applications, green (eco-protective) technologies, and entrepreneurs and their companies. He is currently engaged as the Community Evangelist for Pearltrees.com, a new social curation tool. Oliver was also a professional cyclist and six time member of the US National Cycling Team.
View all posts by Oliver →
This entry was posted in big brother, Creative Writing, Political and tagged Bush, California, China, Chinafornia, Clinton, Debt, Fiction, GHW Bush, Iran, Mars, McCain, Obama, oliver starr, owstarr.com, Romney, Saudi Arabia, US. Bookmark the permalink.