Controversy at TC50, Who Owns the Technology IP: Swype or Shapewriter? 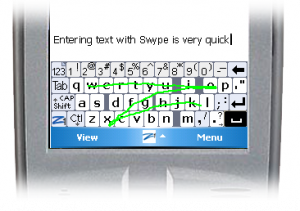 TC50: Swype a company that claims to be at the leading edge of fundamentally altering the way we input data into tablet and touchscreen devices has just demonstrated their technology – an interesting new way of tracing the letters in a word without lifting your stylus or finger and the word appears along with a selection of alternate words in case you perhaps didn’t get the exact word you wanted.

What’s strange about this is the fact that another application, WordPad by a company called Shapewriter appears to have the exact same type of technology already deployed as an iPhone application.

So the question becomes who owns the intellectual property?  Does one – Swype or the other –  Shapewriter have the key patent claims and is the other infringing?  Tough to say.  What I can say is that having downloaded WordPad on my iPhone it is a pretty interesting new means of entering text and it is fairly evident that with use one could become quite proficient at entering even large amounts of text this way.

When asked if they have any competition, Swype founders at TC50 replied that their was one application which they acknowledged was very similar; Wordpad, however they said that they were confident that in a side by side comparison that WordPad wouldn’t compare favorably to Swype.  More specifically they stated that they believed their algorithm was more sophisticated that it offered more functionality and better ease of use than WordPad.

Having not had the chance to try Swype yet I can’t say how it compares to WordPad.  Wordpad is pretty sophisticated and I have found it to be fairly usable.  My main complaint is simply that you can’t use WordPad across the entire iPhone interface and this limitation severaly limits the utility of the application.  Building this functionality into the interface in general would be a much better approach and one that I’m certain would be welcomed by smartphone users everywhere.

As for the brewing controversy – I’ll be checking in with both companies to see what the real situation is and if something breaks in this regard I’ll post an update.

Oliver Starr is a well known blogger, speaker and serial entrepreneur. His current blogging is focused on mobile technology and applications, green (eco-protective) technologies, and entrepreneurs and their companies. He is currently engaged as the Community Evangelist for Pearltrees.com, a new social curation tool. Oliver was also a professional cyclist and six time member of the US National Cycling Team.
View all posts by Oliver →
This entry was posted in Blog Power, iPhone, Personal and tagged controversy, dispute, mobile, oliverstarr.com, patent, shapewriter, swype, t9, TC50, wordpad. Bookmark the permalink.

8 Responses to Controversy at TC50, Who Owns the Technology IP: Swype or Shapewriter?