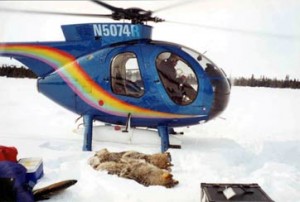 On C-Span this morning I was just listening to Washington Journal a show that allows callers to speak live on the air to discuss issues related to the current news.  Most of the commentary today focused upon the political race. However I was shocked when a caller – a woman, clearly distraught – called in to state that she couldn’t in good conscience vote for a candidate that was in favor of killing wolves.

In fact the caller stated that Palin has supported a $150 per pelt bounty on wolves in Alaska and that further she supports legalizing the hunting of wolves from helicopter which is one of the principal methods of culling wolves that nearly lead to their extinction (and did lead to their extinction in the lower 48 states until the fairly recent Yellowstone wolf reintroduction brought a limited number of wolves back).

Palin is clearly cruel, in spite of being a “hunter” doesn’t have a clue about supporting the natural predator/prey balance and it is obvious that if this is her ability to look at a situation that has clear divisions between the right and wrong action and she is capable of coming down on the wrong side in spite of the obvious correct course of action, she is simply incapable of making balanced decisions and that makes her as much like the status quo in the whitehouse as her running mate.

Personally, anyone that would kill a wolf doesn’t deserve to draw breath in my book and any politician that would support the cruel practice of hunting via helicopter or would support bounties on an animal so crucial to the natural balance is absolutely unfit to lead and unworthy of a following.

Oliver Starr is a well known blogger, speaker and serial entrepreneur. His current blogging is focused on mobile technology and applications, green (eco-protective) technologies, and entrepreneurs and their companies. He is currently engaged as the Community Evangelist for Pearltrees.com, a new social curation tool. Oliver was also a professional cyclist and six time member of the US National Cycling Team.
View all posts by Oliver →
This entry was posted in Blog Power, Personal, Political and tagged aerial hunting, bounty, crime against humanity, natural balance, owstarr.com, palin, wolf killer. Bookmark the permalink.