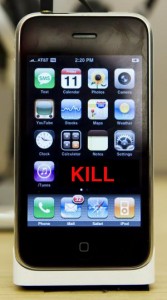 Yahoo is reporting that Steve Jobs has admitted to the fact that Apple has installed a “kill switch” on the new iPhone that allows the company to take action to remotely remove an application from the device.

According to the story Jonathan Zdziarski, author of the books iPhone Open Application Development and iPhone Forensics Manual, discovered a URL buried in Apple’s firmware that  links to a file dubbed “unauthorized Apps” where malicious or simply bad apps might go once they disappear from the App Store.

Apple has already pulled several applications that were initially approved form the App Store including a tethering application called NetShare, a frivolous and stupid application called I Am Rich (if anyone bought this and you know them, please do us all a favor and take them out behind the chemical shed and shoot them for treason, sedition and really bad taste), and another application called BoxOffice.

Jobs claims that the function is only there in case a malacious application is somehow distributed through the store but there have been many stores selling applications for years and never before has a kill switch been necessary to protect the consumer.

Of perhaps even greater concern is the fact that Apple didn’t admit this up front but only came clean when this was discovered by Zdziarski.  One has to wonder if they ever would have revealed this sneaky inclusion in the firmware had the enterprising developer not done such a good job investigating the device.

Further it begs the question what else has Apple hidden in the iPhone 3G that we haven’t discovered yet?  Are their invasive elements to the phone that make it easier to tap than another device?  Is the device secretly logging history and reporting it back to Apple for contextual advertising?  Is it logging my every step with the gps and figuring out where I go and when both to advertise more efficiently as well as for the more neferaious purposes of Homeland security.

The scary thing is that we can’t possibly be sure WHAT Apple has hidden in the code and we certainly can’t trust them to tell us the truth.  They’ve already lied to us so many times that you think we’d be used to it by now and perhaps maybe we are.  After all, no one bothered to delve into the bricking of the iPhones in much detail last year and Apple had another dirty secret that time around that I won’t even print for fear of reprisals.

Of course this also reaffirms Apple’s position as god – how many companies could get away with this and have a customer base left the following day.  If someone found this kind of code in a Microsoft application or a Sony device (the rootkit debacle anyone?) we’d all be screaming bloody murder.

I love Apple gear as much as the next guy but isn’t it time we wiped the smug smile of their faces when they pull crap like this?

Remember when this was Apple’s image?  [YouTube:http://www.youtube.com/watch?v=OYecfV3ubP8&autoplay=0 300 300]

Since when did they go from anti-establishment to being “big brother”?

Oliver Starr is a well known blogger, speaker and serial entrepreneur. His current blogging is focused on mobile technology and applications, green (eco-protective) technologies, and entrepreneurs and their companies. He is currently engaged as the Community Evangelist for Pearltrees.com, a new social curation tool. Oliver was also a professional cyclist and six time member of the US National Cycling Team.
View all posts by Oliver →
This entry was posted in big brother, mobile, Personal and tagged Apple deceit, bullshit, devious, iPhone 3G, Kill Switch, remote control. Bookmark the permalink.