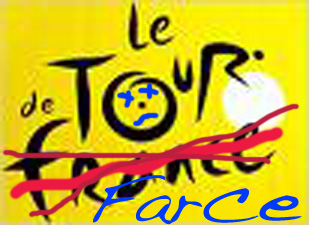 So ends one of the most ludicrous, unfair, illegitimate and biased trials in the history of professional sport. According to CNN, a three person committee meeting in Lausanne Switzerland has issued a 58 page ruling denying Floyd’s request to be heard on appeal.  In addition to upholding the previous decision of WADA (the World Anti-Doping Association) the committee criticized Landis harshly and fined him an additional $100,000 to go towards covering a portion of the expenses accrued by WADA and USADA (the United States Anti Doping Association) while they prosecuted Landis for his supposed use of synthetic testosterone during the 2006 Tour de France.

From my perspective as a biochemist and a former professional cyclist who raced many times with Floyd this is a sad day for Floyd but also for the sport of cycling.  This ending – in my opinion- is the culmination of a witch hunt that has been going on ever since Lance Armstrong donned  his first yellow jersey.

This is much less about a true agenda to keep the sport clean and much more about retribution for having the temerity to win the Tour de France seven times and never come up positive for drugs.  Only they couldn’t nail Lance (and I’m not saying that Lance took drugs, either.  In fact if there was any single human being capable of doing what he did without drugs, it was Lance who could do it).

So Landis gets to take the fall, payback from a frustrated country that hasn’t had an athlete capable of winning their own national tour since Fignon lost to LeMond back when EPO couldn’t be detected and amateurs were dropping dead like flies from the drugs they were using.

So Landis is now out of options, out of a job, a title and apparently out of money too.  What really sucks about this is that I’m still not convinced that he was positive for synthetic testosterone that he ingested the day he staged his miraculous comeback.  The numbers for that never added up in my mind, the case was based upon data that was clearly flawed and the court that arbitrated the hearing was so intent on nailing Landis to the proverbial cross that they overlooked the half dozen obvious flaws in the testing, the analysis, the reporting and even the disclosure of the test results.

Any one of these issues should have been sufficient to have this whole thing tossed out and the fact that it wasn’t is prima facie evidence in my opinion that they never had any intention of giving Landis a fair trial.  It was a forgone conclusion from the start that Floyd was going to be the sacrificial lamb and so he was.

This sucks for the sport.  It’s really too bad that the riders don’t have the initiative to unionize and stand up to USADA and WADA and all the other “ADAs”.  These “ASS-sociations” are the ones that are screwing up the sport.  If I were leading the rider’s union I’d suggest that not a single rider submit to another control until there are better ways so insure that the rider’s rights are preserved during the anti-doping control process and that there is no way that a rider can be arbitrarily called a doper and have his career destroyed when the truth is really that incompetent technicians using flawed procedures are the ones at fault and should be the people held accountable.

I know this sounds like I’m soft on Floyd but that simply isn’t the truth.  I’m sympathetic towards Floyd, it’s true, but only because I know enough about what has gone on and also about what lead to his comeback (See “Floyd Landis and the Magic Water Bottle; Part 1, Part 2)to be certain beyond a reasonable doubt that Floyd didn’t dope on the 17th stage and that the stripping of his title and the destruction of his career are a travesty and an assault on a hard working and  deserving champion.

One of the things that really pisses me off about this is the hypocrisy of the other riders in the race.  If there’s a single professional cyclist in the peloton of the Tour de France that is totally ignorant about which drugs to use and when to use them, he’s both inhumanly gifted and spectacularly naive.   These guys all know that you don’t use testosterone for a single day performance boost.  It simply doesn’t work that way and the doctors, the riders, the USADA and WADA judges all know this.  Floyd knew this too.  In fact, a single injection of testosterone in the morning before a stage would have been among the dumbest of all possible moves.

Not only does it not help, and likely hinder performance, is readily detected and difficult to mask, the shot itself can make you sore too.  Steroids have their place in a properly constructed doping protocol but that place is not 0n the morning of the 17th stage of the Tour.  The fact that all these riders – guys that Floyd has raced with for almost a decade – and guys that I’m sure Floyd treated with respect have been pathetic and spineless.  I guess that’s sort of to be expected. After all, look how these guys fight.

All the same, what goes around comes around and when one of the guys that benefited from Landis ridiculous disqualification finds himself on the wrong side of a bottle of piss there won’t be anyone to stand up for him either.  Of course this sort of thing is relatively unlikely to happen again soon.  There aren’t many Americans with a Tour de France win in their future tearing up the road these days and the one guy that I think has a chance to be that good is still a junior – though with the genetics of David Phinney and Connie Carpenter-Phinney I think you can expect great things from him so long as the doping police leave him alone…

Oliver Starr is a well known blogger, speaker and serial entrepreneur. His current blogging is focused on mobile technology and applications, green (eco-protective) technologies, and entrepreneurs and their companies. He is currently engaged as the Community Evangelist for Pearltrees.com, a new social curation tool. Oliver was also a professional cyclist and six time member of the US National Cycling Team.
View all posts by Oliver →
This entry was posted in Personal, Political, Sport and tagged CAS, doping, drugs, Landis, oliver starr, owstarr.com, starrtrek, steroids, testosterone, Tour de Farce, tour de france, WADA. Bookmark the permalink.