Op Ed of the Year (and a warning Obama must heed) 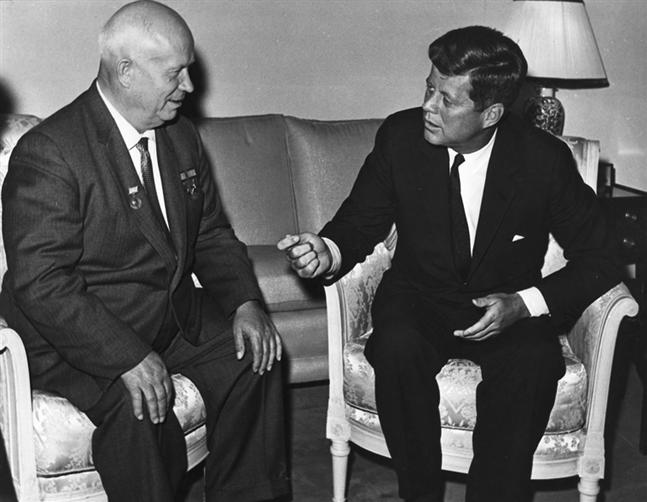 In today’s New York Times Nathan Thrall and Jesse James Wilkins write eloquently about JFK’s meeting with Nikita Khrushchev in Vienna in 1961. According to the accounts of Kennedy’s aides and even Kennedy himself, the meeting was a disaster with Khrushchev “pummeling” Kennedy on multiple topics and from nearly every angle.

Kennedy’s aides convinced the press at the time that behind closed doors the president was performing well, but American diplomats in attendance, including the ambassador to the Soviet Union, later said they were shocked that Kennedy had taken so much abuse. Paul Nitze, the assistant secretary of defense, said the meeting was “just a disaster.” Khrushchev’s aide, after the first day, said the American president seemed “very inexperienced, even immature.” Khrushchev agreed, noting that the youthful Kennedy was “too intelligent and too weak.” The Soviet leader left Vienna elated — and with a very low opinion of the leader of the free world.

Kennedy’s assessment of his own performance was no less severe. Only a few minutes after parting with Khrushchev, Kennedy, a World War II veteran, told James Reston of The New York Times that the summit meeting had been the “roughest thing in my life.” Kennedy went on: “He just beat the hell out of me. I’ve got a terrible problem if he thinks I’m inexperienced and have no guts. Until we remove those ideas we won’t get anywhere with him.”

Two months following this meeting Khrushchev ordered the beginning of the construction of what became the Berlin Wall. Shortly after that he ordered the installation of missile bases in Cuba.

Obama is no Kennedy but he does share some of the same apparent traits. Traits that appeared to be problematic for JFK in the aforementioned meeting. What I believe was originally a cavalier answer to a question posed by a clever Internet viewer for one of the YouTube debates has metastasized into a policy platform that has proven to be incredibly problematic for Obama.

This position, however, may be an unfortunate indicator of a much deeper problem, one that America needs to be clear may exist; Obama may be unwilling to admit when he’s wrong or acknowledge when his judgment has been erroneous. This is troubling. If his stance is completely inflexible, even when it is obvious that this stance isn’t politically or practically correct, this does not bode well.

One of Obama’s obvious weaknesses is the fact that he is inexperienced. A willingness to learn, to be open-minded, to find experienced cabinet members and take their advice would be the obvious solution to shore up this deficiency. However that solution can only be effective if Obama is willing to admit it when he’s wrong and change direction as a result.

So far nothing I’ve seen indicates that Obama has the ability to do this or the self confidence to admit it when he’s made a bad call. In fact, at every opportunity  where Obama could have acknowledged that another route might be preferable he has stubbornly refused to change course and in some instances this has been damaging to his campaign.

If Khrushchev thought that Kennedy was too intelligent and too weak what will other less than friendly foreign leaders – and particularly Vladimir Putin – make of Obama? A man that is already being categorized as intellectually elitist by his own constituents?

While I am on record as fearing for our country should McCain be elected I share equal concern about an Obama Presidency. While they say that an old dog can’t learn new tricks, perhaps the younger dog will put that so called “intellectual elitism” to some practical use and start taking the advice of a few people that have the experience he so clearly lacks.

Obama is clearly fond of trying to position himself as walking in the footsteps of John F. Kennedy. Make no mistake about it, he definitely sees himself in this light. We can only hope that he is capable of shining that light in the shadows of the JFK Presidency and taking care to avoid making the same mistakes that a man ten thousand times his better made during his brief time as our President.