Our Freedom of Speech is Under Attack 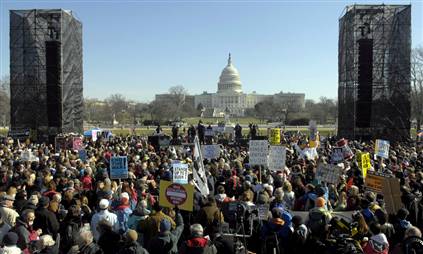 You have to hand it to our current administration. Even in the waning days of their questionably legitimate term in office they’re still trying to make us sit still, shut up, and stop asking questions. This time it’s our right to assemble that is about to get an interesting revision in – of all places – the National Mall in Washington DC.

If they’d had it their way, the Bush administration would finalize a new management plan for the National Mall that would severely curtail the rights we enjoy to stage peaceful protests in what is without argument one of the most crucial venues for public demonstrations in the country.

In addition to restrictions on granting permits that include mandatory “rest periods” . According to lawyer Mara Verheyden-Hilliard of the Partnership for Civil Justice, which advocates for protest groups, “the Park Service is unfairly linking appearance and protest.” Further, she stated; “They’re suggesting that robust political speech and use of [the Mall] . . . for political protest is somehow incongruous or in conflict with the location itself,” .

More troubling, however, than a restriction on the frequency with which permits for large events would be granted is the plan to create a “designated protest area”.

Opponents of this concept refer to the area as “the protest pit”, and it is fairly clear from the location and the planned attributes that flowery facility-oriented discussion aside, they want to make it easier for officials to contain a group and even control it if necessary. For some reason this is reminding me of New York city and the debacle during the Republican National Convention a few years ago.

While you may not be one inclined towards public protest and therefor think this has little importance in your life, just keep in mind that freedom to assemble, freedom to protest and freedom to write what we want and publish it where we wish are all part and parcel of one of this country’s most crucial underpinning concepts. We must recognize that our freedoms have been under near constant threat during the reign of constitutional surgery that has been enacted by eight years of Presidential Special Directives and other machinations of this country’s highest office.

We must take a stand and say “No More!”.

As bloggers we are really on the front lines of this type of battle and it is incumbent upon us to take action by supporting those that are actively preventing further erosion of our rights and by helping use our favored medium to spread the word.

Below are links to both the information about this pending decision and one click resources that will allow you to take action yourself to preserve our access to this national landmark. Please help the folks that are working so hard to keep our voices unfettered.

Click here to sign a statement protesting the new plan, and here to send a letter protesting this possible course of action by the National Parks Service.

Additional information can be found here. A copy of my version of the letter is below for anyone that would like to use my somewhat strident language in addition to the text supplied by the link above.

I have read about the plans for the National Mall and believe it is profoundly undemocratic for the government to direct people where to protest and to restrict the use of the National Mall for demonstrations.

The Mall is an historically important location for free speech in the Nation’s Capital. I oppose any effort by the Bush Administration to alter the fundamental right of the people to assemble on the Mall.

During the past seven plus years of the Bush administration – which in and of itself is of highly questionable legitimacy – we have seen a substantial erosion of our constitutional rights without due process, with little regard for the rights of the people of the United States and even less regard for the limits of the rights afforded the President of the US as defined by our constitution.

The degradation of individual freedoms in this country must go no further. To curtail our right to assemble or to speak truth to power by limiting our right to assemble on the National Mall is an affront to our democracy, an insult to the men and women putting their own lives in jeopardy around the world to preserve the very freedoms that we are losing here at home, and represents a nearly despotic act that violates both the spirit and law under which the US was established as a sovereign nation.

This proposed act represents yet another abuse of the office of the President. It must be stopped as must all further efforts to limit free speech, freedom to assemble, freedom of the press or freedom of any other sort as defined by our Bill of Rights. The runaway administration of Bush and his cronies has gone too far – I urge you to put an end to the abuses levied against our freedom and put an end to this ill-intentioned and illegal act immediately.

Oliver Starr is a well known blogger, speaker and serial entrepreneur. His current blogging is focused on mobile technology and applications, green (eco-protective) technologies, and entrepreneurs and their companies. He is currently engaged as the Community Evangelist for Pearltrees.com, a new social curation tool. Oliver was also a professional cyclist and six time member of the US National Cycling Team.
View all posts by Oliver →
This entry was posted in big brother, Political and tagged Bush, constitutional rights, first ammendment, free speech, freedom to assemble, oliverstarr, owstarr.com, Political. Bookmark the permalink.

3 Responses to Our Freedom of Speech is Under Attack