Final Shot at Impeaching the Criminals: Will Bush Pardon Himself? 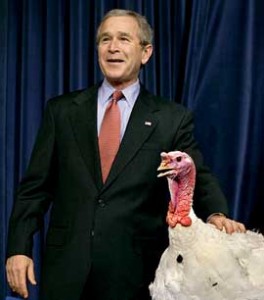 I’m going to put big money on an affirmative.  That is unless we, the people, do something to prevent it.  From “The Pen”

Impeach Bush Before He Pardons Himself

According to Seymour Hersh there is a conga line of insiders waiting
until January 20th to spill the beans on the gross criminality of the
Bush/Cheney administration. Waiting . . . because if they did it now
the two of them would be tarred and feathered on the way out the
door.

But we the people do not have to wait. We can and must demand the
immediate impeachment of both Bush and Cheney for what is already
known. At the very least the defiance of congressional subpoenas at
the behest of the White House is an open and shut case for
accountability now.

Because as his final constitutional insult, his final spit in the
face to the American people and all rule of law, it is transparently
obvious that Bush is planning the most wholesale and wrongful pardon
of the worst political criminals in American history, his whole
criminal gang, INCLUDING himself.

And don’t think that is not their precise plan. Please, what power
has Bush NOT abused? What heinous, self-serving, shameless and
dishonest act has he ever shied away from, when he was torturing and
eavesdropping and lying us into wars of corporate aggression. Does
anyone doubt that is what he is planning on doing?

And when you submit this action page, you will have one last chance
to get one of the “Impeach Both!!!” caps, which after January 20th
will no longer be available from us for love or for money.

Will Congress now act? That is not the yardstick of the worth of our
activism. We speak out because we must speak out, whether we are
heeded or not. Let history record that we spoke out until the last
minute to the eternal shame of those who did not. Because when enough
of us speak out at once, the worst thing that can possibly happen is
that we are building the progressive base for the REAL change of the
future.

So Bush most certainly is planning on pardoning himself. And all the
right wing lock down ideologues in the corporate controlled media
will call it “healing”. Let’s all make nice with war criminals? Shall
we all make nice with the gang rape of our economy, our environment
and our Constitution? We think not.

And one more thing. You know that come January 20th the right wing
will start calling for the impeachment of our new president, over a
endless litany of the most ridiculous of trivial trifles. In fact it
has already started even though he has not even taken office. If they
are so hot on impeaching someone, let them speak out now, when it
truly is called for, or shut the hell up in 73 days.

Please take action NOW, so we can win all victories that are supposed
to be ours, and forward this alert as widely as possible.

One Response to Final Shot at Impeaching the Criminals: Will Bush Pardon Himself?